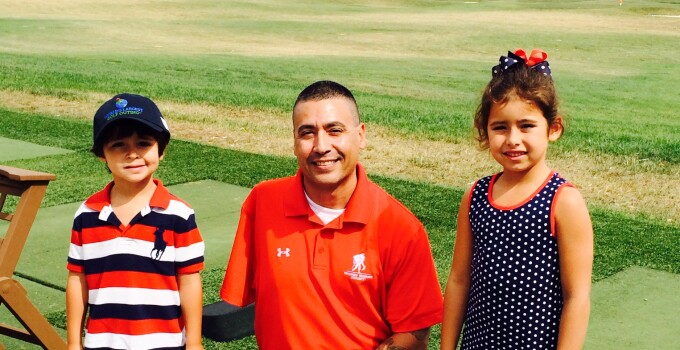 Among the 11,500-plus players in the 2014 World's Largest Golf Outing, almost 500 of them were Wounded Warriors. WTOP reporter Noah Frank recounted the experience of playing with one soldier at 1757 Golf Club in Dulles, Va.

At first, Frank was disappointed; he didn't think Brandon Hughes was a Wounded Warrior. But as he got to talking to the long-hitting Hughes, he learned the scars of war are sometimes invisible to the naked eye.

Hughes survived the first one unscathed. And while he didn't lose an arm, like Lara, he was hit by an improvised explosive device on the side of the road during his second tour. Much like Lara, he was knocked unconscious and awoke in a hospital. He has been treated for traumatic brain injury, a condition that has affected more than 300,000 service members and counting since 2000.

While he looks like a normal, healthy 20-something -- and can crush the ball much farther than a lot of golfers, present company included -- Hughes has had to rehab at Ft. Belvoir since returning to the States. One more blow to the head, he says, and the doctors don't know what might happen to him.

Hundreds of other veterans who didn't play were on-hand nationwide to share their experiences, including Norbie Lara. Lara lost his arm in Iraq, the result of a rocket-propelled grenade attack in 2004, and received the Purple Heart and the Bronze Star. While he didn't play at 1757 Golf Club, Lara spoke with participants ahead of the event on Monday.