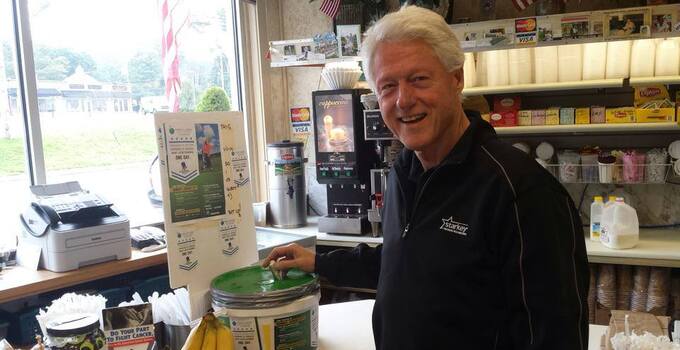 It was just another beautiful Sunday morning in the town of New Castle, N.Y. President Bill Clinton was out and about in town near his home in Chappaqua when he stopped into Lange's Little Store.

Former town manager John Buckley happened to be in the deli as well, making conversation with the former president. The topic turned into the bucket Buckley and deli owner Rich Lange put out on the corner each summer in support of the World's Largest Golf Outing and Wounded Warrior Project. Buckley explained the concept to President Clinton and how Hudson Hills G.C. was one of the participating courses.

Then Clinton reached into his pocket and was happy to make a donation. Buckley snapped the picture.

"President Clinton played golf the day the course was opened," Buckley explained Sunday night by phone. "He was talking about it in the deli. 'That's got some tough holes,' he said."

The bucket typically nets a few thousand dollars each year, which Lange and Buckley present the day of the World's Largest Golf Outing. Hopefully this particular donation will spur even more.

It's not too late to sign up to play in the 2014 World's Largest Golf Outing or support any of our teams with a donation that supports Wounded Warrior Project. Head over to our website to learn more.