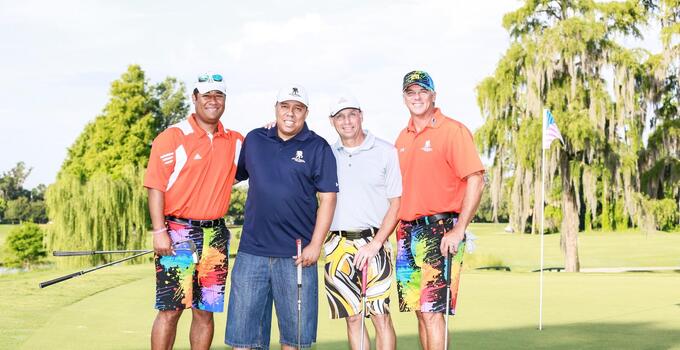 ORLANDO -- Today at Dubsdread we were lucky enough to have a player from the Courage Cup, Ken Gestring.

Master Sergeant Kenneth Gestring retired in November 2011 after serving nearly 26 years as a medic in the United States Air Force. During his 2009-2010 deployment with a Provincial Reconstruction Team in support of Operation Enduring Freedom, his medical skills were tested when three Afghan National Police and 10 members of his Army/Air Force team were hit with a grenade. Although he was injured, Master Sergeant Gestring rendered life-saving treatment to the injured coalition force members.

For his actions that day, he received the Purple Heart, U.S. Air Force Meritorious Service Medal, U.S. Army Achievement Medal, Air Force Combat Action Medal and the Army Combat Field Medic Badge. He is also a 2010 honoree in the fifth volume of the U.S. Air Force “Portraits in Courage.”

Master Sergeant Gestring and his wife, Corina, live in Niceville, Fla., with their two children, Nicholas and Nina.

Ken is the captain of the 2014 Courage Cup Team, which pits 10 US Wounded Warriors against 10 Wounded Warriors from Great Britain in a Ryder Cup format golf tournament. They will be playing in the UK at Walton Heath Golf Club, home of the 1981 Ryder Cup.

@BillyCasperGolf
Thank you to all the #PGM students who talked with us about our initiatives, careers & opportunities at… https://t.co/0AdXqEZCBS
0 Retweets